Get Up One More Time! 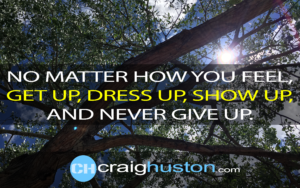 I find it fascinating that we have a tendency to look at someone who has been wildly successful and think, “Wow! They are really lucky.” Or we might refer to them as an overnight success. Most people see the result without considering the journey. They say they want what the other person has, but are they really willing to pay the price to achieve incredible results?

Just last week I had the opportunity to attend a wonderful event for the Fellowship of Christian Athletes. Mark Richt, head coach for the University of Miami’s football team, was the keynote speaker. He was introduced, appropriately, as having led his teams to two SEC Championships and six SEC Eastern Division titles and nine bowl games. And, last year, he led the Hurricanes to their first bowl game victory in over a decade. Quite the successful career.

What stood out in his talk was the focus on the journey instead of the accomplishments. Growing up playing football, his goal was to play in the NFL. When he graduated from UM, draft day came and went and the phone never rang. However, his agent called him and said there were two opportunities for him. One with the Denver Broncos and the other with the Pittsburgh Steelers.

He chose Denver. He was the first player cut from the roster. Richt moved back to his hometown of Boca Raton, FL and got a job selling insurance. The company closed its doors and he lost his job. Then he went into direct sales with another company where he shortly lost his job. Back to the classifieds. He became a valet for a resort in Boca and after a while, called his agent to say he wanted to try out for the NFL again. His agent fired him. He then called on a friend who wanted to be an agent. He told him they could work together to help each other out. He got a shot with the Miami Dolphins.

Walking into the locker room, he saw his jersey, #9. His high school number. The thought to himself, wow, that is really nice of them to think of doing that for me. A few minutes later, the equipment manager said, “Is that your jersey?”

Equipment Manager, “Nope. Every quarterback that gets the number 9 gets cut.”

Not long after, he was called into coach Shula’s office and asked to bring his playbook. Cut again.

Most people would just give up after so many failures and closed doors, but not Richt. He was finally offered a job. This time with Bobby Bowden at Florida State. His college coaching career had begun, and the rest is, as they say, history. And there is more to come.